HomeFor the RecordLessons about Babies’ Brains, Language Skills for Mothers-To-Be

Bruna Fortunato’s journeys from Brazil and to pregnancy have not been easy.

When the 25-year-old first came to this country four years ago to make a better life for herself, she struggled with learning a new language and keeping up with bills. She stayed less than a year. Once back in Brazil, however, Bruna realized that she wanted to make another go of it in the United States. 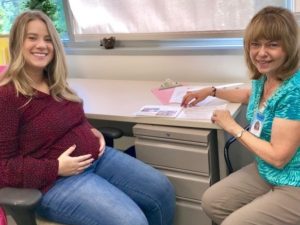 Shortly after her return to Connecticut in 2015, Bruna met her husband, Christian, a former Marine now enrolled in the Connecticut Police Academy. After much sadness over a failed first pregnancy, the couple are happily expecting their first child, a son, in early December.

Today Bruna is one of about 300 women receiving their obstetric care at Southwest Community Health Center in Bridgeport. The center is partnered with Read to Grow’s Prenatal Project, which means pregnant women receive information about early childhood literacy and new, free baby books. The OB patients learn about the importance of developing the language skills of babies and how parents are their children’s first teachers. With the new board books, they can create home libraries before their children are born.

Read to Grow staff continue to expand this work at other community health center.

Over the months, Bruna has jumped at the chance to learn about the best ways to prepare her baby for success. Even though she grew up with books and could read before kindergarten, she became aware through the Prenatal Project of just how early that learning begins.

“I am so happy to have this opportunity,” she said. “I never knew about a baby’s brain connections and how important it is to stimulate them by talking and reading and singing.”

Bruna also learned during a prenatal session that her baby could hear voices and other sounds at 20 weeks of gestation. “My baby can hear me right now!” she said. “It’s awesome. I also love that the books have two languages.”

The Fortunatos hope their son will eventually have command of not only English but also Bruna’s native Portuguese and Spanish, which Christian speaks.

Cathy Nucera, RN Coordinator at Southwest Community Health Center, said, “It’s so good to hear that what we do makes a difference in someone’s life. It gives us motivation to continue to give the message of literacy.”

Bruna already has three books ready for her son when he is born. In fact, she added, Christian is “already reading the Read to Grow books to Zachary (in the womb)!”

For her part, Bruna has cut down on her use of screens. After learning that screen time is not recommended for children under 2, she gave her tablet to her mother to avoid temptation. “I was on Facebook too much, and I want to avoid screens as much as I can for Zachary. For me, it’s a no-no!”

From the beginning of motherhood, she said, “I want to get this right.”